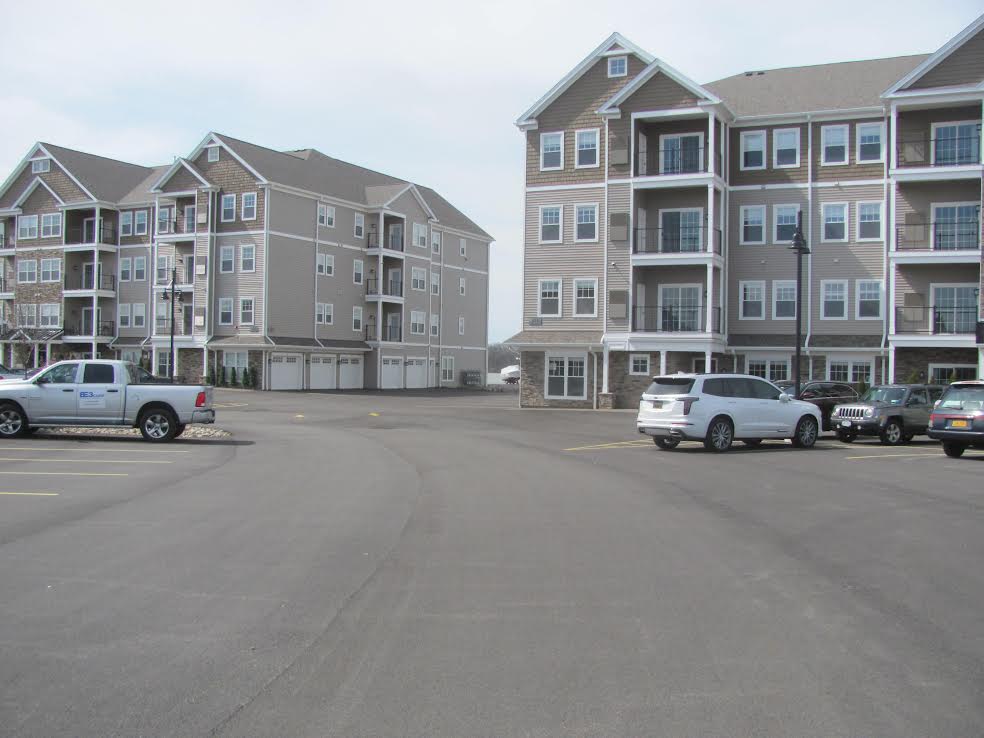 By adminNovember 5, 2021No Comments

National Environmental Policy Act (NEPA) was enacted by congress in December, 1969. President Nixon signed it into law on January 1,1970. NEPA was the first major environmental law in the United States and established our country’s national environmental policies.

NEPA requires federal agencies to examine the environment effects of their proposed actions prior to making decisions. In other words, if an agency wants to build a trash incinerator, dam a river, or widen a highway it must first formally consider how that project will affect the environment and its surrounding communities. When an agency begins a project, they must prepare a report called an Environmental Assessment, which summarizes the consequences of the project. This assessment is beneficial for two major reasons : better informed decisions and citizen involvement.

Citizens input is especially important as they will be the ones who live in communities where an environmental impact will be made. In addition,  citizens often have valuable information about the potential environmental, social, and economic effects that proposed federal actions may have on places and resources. NEPA’s requirements provide the public the means to work with the agencies. It’s important to know that commenting on a proposal is not considered a vote on whether or not a proposed action should take place. However, comments can influence the decision makers. 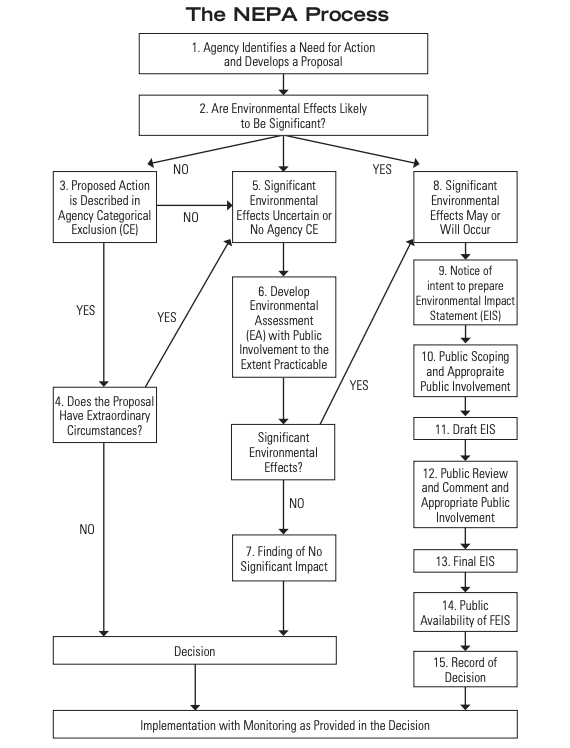 How does the NEPA Process work?

The NEPA process is complex and has several components.The figure below illustrates the various different routes a NEPA Process can take. Every process begins when an agency develops a proposal for a new project. Some larger and more complex proposals often involve federal, state, and local agencies/reviewers.The second step in the process is determining whether the agency will pursue the path of Categorical Exclusion (CE), an Environmental Assessment (EA) or an Environmental Impact Statement (EIS). It is common for the NEPA process to be resolved prior to an EIS, which is detailed and goes beyond the requirements needed for an environmental assessment and a categorical exclusion.

A CE is a resultant action when the lead agency has determined the project has no significant effect on human health and the environment. Some common examples of this include things like installing energy efficient lighting, reconstructing hiking trails, or any minor facility renovations. CE’s are based on experience with a prior project and its environmental effects.

Environmental assessments are used to determine the significance of the environmental effects and look at the most effective and least impactful approach to completing the project. EAs can also provide evidence to determine if an Environmental Impact Statement (EIS) is necessary.

An EIS is prepared for a major action that has been determined to affect the quality of the human environment. The requirements for an EIS address a comprehensive list of potential impacts to adjacent properties, land, water, air, structures, living organisms, environmental values at the site, and the social, culturally and economic aspects.The public can get involved as soon as the EIS process begins. Public involvement helps to make informative, rational, and strong arguments regarding potential impacts the proposed project could have on human health and the environment. The comment period is at least 45 days after which, a final EIS is then published, providing responses to comments. The EIS ends with the issuance of the Record of Decision (ROD). That explains the agency’s decisions, describes the alternatives the agency considered, and discusses the agency’s plans for mitigation and monitoring, if necessary.

New York SEQRA is very similar to the NEPA process since it also is designed to facilitate informed decision making on state or local government funded or approved projects. SEQRA requires that state agencies study the environmental consequences of the proposed project and review impacts related to permitting, endangered species, wetlands, adjacent areas, etc. SEQRA, like NEPA, is intended to fundamentally improve government decision making by requiring that environmental concerns be integrated within the planning and approval process. Also similar to NEPA, although SEQRA is not the primary mechanism for project approval, it must be completed before the final decision can be issued.

How does the SEQRA process work?

An EIS under SEQRA is only needed if an action is determined to have potentially significant environmental impacts. The SEQRA process also encourages public participation through the coordination of a lead agency. SEQRA applies to state local government agencies including districts and special boards and authorities that must approve or is funding a proposed project/action. It also applies whenever an agency directly undertakes an action. Like NEPA, the SEQRA process is often completed prior to an EIS being developed. The following are examples where an EIS may not be required as written in the statute that defines Type 1 and Type 2 Actions:

In summary, the prescriptive processes created from the establishment of NEPA and SEQRA are intended to ensure through comprehensive review that government funded or approved projects or actions will minimize impacts on human health and the environment. These long standing laws allow for the public to get involved. The resultant decisions made through NEPA and SEQRA allow for collaborative efforts focused on being more considerate of the long term consequences an action can have on the environment.

We use cookies on our website to give you the most relevant experience by remembering your preferences and repeat visits. By clicking “Accept”, you consent to the use of ALL the cookies.
Cookie settingsACCEPT
Manage consent

This website uses cookies to improve your experience while you navigate through the website. Out of these, the cookies that are categorized as necessary are stored on your browser as they are essential for the working of basic functionalities of the website. We also use third-party cookies that help us analyze and understand how you use this website. These cookies will be stored in your browser only with your consent. You also have the option to opt-out of these cookies. But opting out of some of these cookies may affect your browsing experience.
Necessary Always Enabled
Necessary cookies are absolutely essential for the website to function properly. These cookies ensure basic functionalities and security features of the website, anonymously.
Functional
Functional cookies help to perform certain functionalities like sharing the content of the website on social media platforms, collect feedbacks, and other third-party features.
Performance
Performance cookies are used to understand and analyze the key performance indexes of the website which helps in delivering a better user experience for the visitors.
Analytics
Analytical cookies are used to understand how visitors interact with the website. These cookies help provide information on metrics the number of visitors, bounce rate, traffic source, etc.
Advertisement
Advertisement cookies are used to provide visitors with relevant ads and marketing campaigns. These cookies track visitors across websites and collect information to provide customized ads.
Others
Other uncategorized cookies are those that are being analyzed and have not been classified into a category as yet.
SAVE & ACCEPT