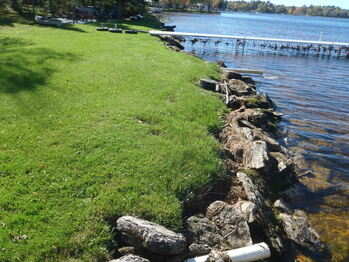 What is Erosion Control?

Erosion is a naturally occurring process that is accelerated by earth-disturbing projects. Erosion may damage the ecosystem and environment, increase water treatment and maintenance costs and leave the land susceptible to harmful weeds. By executing effective erosion control, it may help reduce the spread of invasive plant species which is one of the four threats to our nation’s forests and grasslands.

There are many different types of erosion and becoming familiar with them will help you with erosion control. The principle agents of erosion include water, gravity, wind, ice and chemical action. The actions of these agents form a continuous spectrum erosion that may be related. The spectrum includes forms that may not be traditionally included in the traditional definition of erosion such as landslides. Complicated and high-risk projects may need specialists such as geotechnical engineers, hydrologists, soil scientists and agronomists. Complicated erosion situations occur in large gullies, coastlines and channels, or steep slopes subject to landslides. Surface erosion includes erosion caused by water, gravity and wind.

Water erosion is composed is splash erosion, where rain impacts bare soil dislodging the surface soil particles. The splashing can create a crust “seal” on the soil (surface sealing) making it less permeable and reducing the growth of vegetation. The second part of erosion occurs when water forms very shallow surface flow (sheet erosion). This can occur on any soil that is impacted by water drops or where water begins to flow over the soil surface. Where the erosion occurs and the severity of the erosion all depends on soil erodibility, slope length and angel, storm duration rate, duration of snowmelt and vegetative cover. If this is left untreated, it can develop into more severe rill erosion.

Rill erosion is erosion by water in small micro-channels, 0.2-1.2 inches wide and up to 3 inches deep. Rain or snowmelt contacts the bare soil for durations long enough for the water to develop micro-channels. Rill erosion depends on the soil erodibility, slope length and angle, storm duration intensity, rate and duration of snowmelt and vegetation. Rill erosion can occur on any slope with erodible soil, more severe on steeper slopes. The volume of eroded material increases as the number of rills increase. Increasing clay content decreases the chance of rill formation and if untreated, it may develop into more severe gully erosion.

Gully erosion occurs in channels with U or V shaped cross sections and are located in valleys or hill slopes and is characterized by periodic flow and high width to depth ratios. Dimensions can range from millimeters to meters. Untreated rills on slopes may develop into V shaped gullies and are often found on steep forested areas where concentrated flow begins on steep long slopes with erodible soil.

Seepage erosion is the removal of soil particles by water flowing through soil or bedrock which dislodges and transports soil particles. This occurs when permeable soil layers or underlying joined bedrock exist. It can also occur as part of other erosion processes such as channel, mass movement and chemical erosion.

Dry-ravel erosion is the removal and transport of particles downslope by gravity after these particles loses its cohesion from exposure to the elements when moisture is lost. Dry-ravel erosion is recognized by the lack of rills and other water erosion features but with large amounts of eroded material deposited at the base of the slope.

Mass-Movement Erosion is the movement of mass of rock, debris or earth down a slope. This includes landslides and debris flows.

Wind Erosion is the detachment and transport of soil particles by the wind where the particles move suspended in air (suspension), bouncing (saltation) or rolling (surface creep). This can be a more significant erosion source than water in dry climates or windward facing slopes.

Freeze/thaw erosion occurs during the expansion of freezing water and the contraction of thawing ice. This requires freezing temperatures, time for ice to form, soil moisture and frost prone soils. It can loosen and remove rock and soil and displace seeds in a fine-textured soil.

Glacier or moving ice erosion occurs by large amounts of ice entrapping, grinding and moving soil and rock. It can move soil and rock many miles from its origin.

In order to be successful in erosion control strategies, the soil properties, erodibility and its capability for soil to support vegetation needs to be established. A standard classification of the soil type is necessary for effective communication. The two most common soil classifications are the USDA Soil Texture Classification and the Unified Soil Classification System. In the right conditions, any soil can be responsive during mass movement. Seepage erosion requires high enough permeability to allow seepage and small particles to be easily moved. Seepage-erosion should be low for gravels (large particles with potentially high permeability) and clays (small particles with low permeability) except for dispersive clays which are very erodible. Loamy sands are prone to surface sealing which increases runoff.

Erosion-control treatment is based on six steps:

Parameters to consider during project assessment include:

Controlling erosion is important to preserve the site and minimize the environmental impact that the project has on the surrounding area. BE3 offers a variety of solutions to meet your requirements. Call us today at 716-249-6880.

We use cookies on our website to give you the most relevant experience by remembering your preferences and repeat visits. By clicking “Accept”, you consent to the use of ALL the cookies.
Cookie settingsACCEPT
Manage consent

This website uses cookies to improve your experience while you navigate through the website. Out of these, the cookies that are categorized as necessary are stored on your browser as they are essential for the working of basic functionalities of the website. We also use third-party cookies that help us analyze and understand how you use this website. These cookies will be stored in your browser only with your consent. You also have the option to opt-out of these cookies. But opting out of some of these cookies may affect your browsing experience.
Necessary Always Enabled
Necessary cookies are absolutely essential for the website to function properly. These cookies ensure basic functionalities and security features of the website, anonymously.
Functional
Functional cookies help to perform certain functionalities like sharing the content of the website on social media platforms, collect feedbacks, and other third-party features.
Performance
Performance cookies are used to understand and analyze the key performance indexes of the website which helps in delivering a better user experience for the visitors.
Analytics
Analytical cookies are used to understand how visitors interact with the website. These cookies help provide information on metrics the number of visitors, bounce rate, traffic source, etc.
Advertisement
Advertisement cookies are used to provide visitors with relevant ads and marketing campaigns. These cookies track visitors across websites and collect information to provide customized ads.
Others
Other uncategorized cookies are those that are being analyzed and have not been classified into a category as yet.
SAVE & ACCEPT